What You Should Know About Breast Cancer Screenings September 18, 2020

Back to School: How Your Reproductive Cycle Works August 21, 2020

What You Should Know About Female Health, Menopause and Your Diet July 24, 2020

Coronavirus Update from Our Team! June 12, 2020
What You Need to Know About Stress and Your Menstrual Cycle May 29, 2020

What You Need to Know About Cancer Screenings & Female Health

An integral part of female health is preventive care against several different types of cancer that women can develop. This is why cancer screenings are so necessary during annual well woman exams with your OB/GYN.

Common Female Cancers to Watch For

As you may already know, cancer can develop virtually anywhere in the body, and it begins when cells grow abnormally and crowd out normal, healthy cells. While many cancers are completely treatable and have high survival rates, they can prove fatal if left untreated for too long. In the early stages of the disease, such as stage 1 or 2, cancer hasn’t spread as much. Stage 3 or 4 is more dangerous as cancer has spread more. This is why it’s so important to catch cancer early so you can get treatment as soon as possible before it spreads to your entire body.

This type of cancer forms in breast cells and most commonly occurs in women. During a self-exam, you may be able to detect symptoms of breast cancer, such as:

However, professional cancer screenings in Miami from your OB/GYN are still necessary even if you conduct self-exams often. Treatment for breast cancer may consist of chemotherapy, radiation, and surgery. Women 50 to 74 years old are at average risk for breast cancer, so it’s typically recommended that they get a mammogram every two years. Women should discuss with their doctors to weigh the benefits and risks of cancer screenings when deciding whether to begin mammograms before age 50.

There are two ovaries in the female reproductive system, one on each side of the uterus that produce eggs and the hormones estrogen and progesterone. Ovarian cancer begins in the ovaries but doesn’t usually show any signs until it has further developed. Some symptoms you may experience, however, range from:

During your well woman exam, your OB/GYN will conduct a pelvic exam and a pap smear to detect any ovarian lumps as early as possible. 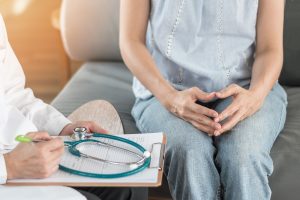 Your cervix is the cartilage tissue connecting the vagina and uterus. Most cervical cancer cases stem from individuals with HPV (human papillomavirus), and it is one of the most common forms of cancer found in women. However, it is treatable and can be detected early through regular pap smear tests. There are not many obvious symptoms that arise with the development of abnormal cervical cells, but you may begin to notice symptoms such as:

Also known as uterine cancer, endometrial cancer affects the lining of the uterus. There are over 200,000 cases of endometrial cancer in the US each year, making it the most common gynecological cancer. If you develop this disease, you may experience symptoms such as:

Endometrial cancer is most common in women 55 years and older. We take special care to speak to our patients who are beginning or have already passed through menopause and alert them of the importance of scheduling regular endometrial cancer screenings. Endometrial Cancer can be detected through a pelvic examination during your annual well woman exam.

Regular cancer screenings are crucial in ensuring the overall health of any woman. These tests can detect different forms of cancer early on, allowing treatment to begin before cancer has a chance to progress and worsen. Don’t skip these exams—it could save your life.

Schedule a cancer screening in Miami during your well woman exam at Dr. Susan Fox’s Center for Women and contact us for any questions or concerns.